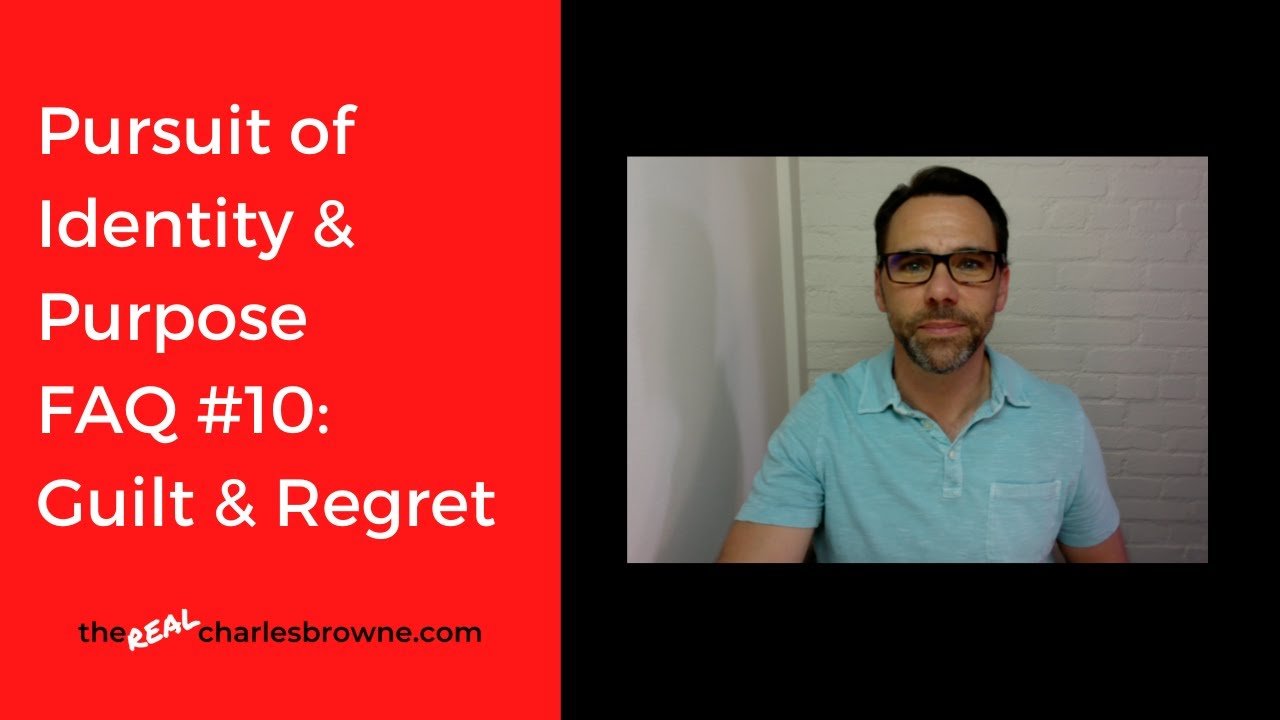 Posted at 13:11h in Beliefs, Values by realcbrowne 0 Comments
0 Likes

Hello and welcome to The Pursuit of Identity & Purpose channel, I am your host The Real Charles Browne.

And today I want to talk to you about Guilt and Regret.

This is the first in a series of posts I plan to post over the next few days, the top ten most frequently asked questions I hear in my practice helping others in their pursuit of Identity and Purpose.

So with that let’s get right into it, so with regard to guilt and regret let’s just say that some guilt is good, some regret is good. It means that you’re a compassionate person who feels remorse or feels bad about having made mistakes in their life.

So on some level if you do harm to an innocent person or through inaction, refuse to help someone that you could have easily helped, it’s probably very healthy that you feel a little bit of guilt, a little bit of regret for not taking action or for taking the wrong actions in those circumstances.

But what I want to talk about is that middle area, that unhealthy spectrum of guilt which is too much, obsessing over your past causing yourself to do a great deal of suffering, feeling that you aren’t adequate or you aren’t good enough, you don’t deserve anything because the mistakes that you made in the past.

So the best thing I can tell you is a couple of things I want to go over right now, this is what I share with most of my clients, first and foremost you have to accept that at that time you did your very best unless you did something purposely to hurt someone in which case you probably wouldn’t be feeling super guilty about it.

You have to accept that you did your very best in that moment, maybe it was a bad day, maybe you were tired, maybe you were anxious, maybe you just had some really stressful stuff going on in your life, but at that moment you broke down, you made a bad choice and now you feel guilty for it.

The next level I would consider if you’re still feeling some guilt around a situation is you should not feel guilt for surviving and this is probably most commonly known as survivor’s guilt, but it doesn’t just have to be surviving a death or surviving some kind of catastrophe.

You have to let yourself accept that it’s perfectly okay for you to have success and to have survived a certain situation that other people didn’t and not feel guilty for that.

The next level I would have you consider is things that were beyond your control. So in the moment when we’re making emotional decisions maybe we don’t recognize that there was absolutely nothing else you could have done. Maybe at the critical moment you thought you had a choice, but the reality is there are a lot of circumstances outside of your control that could have influenced your reaction or your response through an event and maybe there was a thing that was completely out of your control. That’s definitely something worth considering.

The next thing I would tell you to do is to go easy on yourself. A lot of times many of my clients are still working on feeling guilt or regret or shame around not achieving a particular standard. And the reality is it was never their standard to begin with, it was a really unrealistic standard imposed on them by their parents or by their boss or by their sibling or their spouse.

That’s a really dangerous thing to do and that’s one of those ways that you’ll get caught into a cycle of continually going over and over a situation and thinking you’re not good enough, you should have tried harder, maybe there was something else you could have done. Stop for a minute and don’t just take a look at your action, but look at your action in the context of the expected standard, did you set that standard or did someone else?

So that’s really it, those are the big hitters. If you’re feeling a lot of recurring and obsessive guilt, regret or shame I hope this helps and I hope you really make some breakthroughs and make some progress on that.

Also, I’m gonna wrap this up by saying please go ahead and subscribe to this blog and its YouTube channel because what I plan to do over the next few days and the next couple weeks is cover these 10 most frequently asked questions by my clients around the topic of Identity and Purpose.

So each day I’m gonna highlight one of the ten most frequently asked questions; this just happened to be number ten, I did it first because I’m going to work backwards and count up to number one, hopefully build a little bit of a little intrigue and a little suspense and to keep you tuned in.

So again go ahead and subscribe to the channel and if you have any other questions about some of the stuff that we’re talking about here on this YouTube channel go ahead and visit my website at http://therealcharlesbrowne.com/ alright, thank you very much.

Please log in again. The login page will open in a new tab. After logging in you can close it and return to this page.